skip to main | skip to sidebar

I don't think anyone truly understands my love for my Microsoft Trackball Optical Explorer.

I've used mice and trackballs interchangeably since the family first got a computer back in 1993. I've always preferred trackballs. There's been one trackball in particular that has served me well over the years, and it's the Microsoft Trackball Optical Explorer, known affectionately among it's cult following simply as the MTE. It's an optical 5-button trackball, long since discontinued. It is ergonomically the most comfortable device I've ever used, has good response, excellent tracking, and lets me browse or game from my knee or arm of my chair without having to hunch forward. I also think it's earned me a lot of kills in FPS games over the years since the 5 buttons (scroll wheel clicks), finger-tip precision, and ability to spin my camera view around without having to "paw" the mouse has been an awesome asset.

Alright, enough of my gushing about the trackball, you probably think I'm nuts. I've had this thing for the last 7 years or so, and when it finally dies, I think I'll cry. The only place you can find these things new anymore is eBay, and expect to pay a hefty price. I was, in fact, considering this, as the right mouse button has been failing to click (almost feeling stuck down), the scroll wheel has gone wobbly like it's come off a pivot, and the metal bearings that the trackball glides over have been worn down with years of hard use.

I found an eBay posting where some guy has been advertising repair services. After reading what he does, I figured I would try it myself. The only thing I can't currently do is replace the bearings, but I could certainly try to figure out what was going on with the scroll wheel and the right mouse.

So I got busy and got it open. It was surprising inside, with sections of circuit board attached to the ball socket at crazy angles, wired to one another with small ribbon cables (Note: bad picture in retrospect, I have the most important part obscured by the top of the trackball enclosure on the left.) 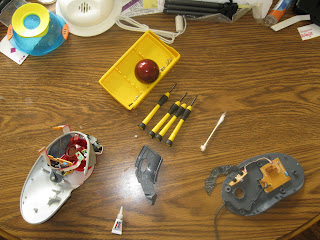 After carefully extricating everything, I found my problem: a piece of plastic had snapped, causing the switch for the right mouse button to jam and breaking off where the scroll wheel was held one end of its axis.

Here was my solution: 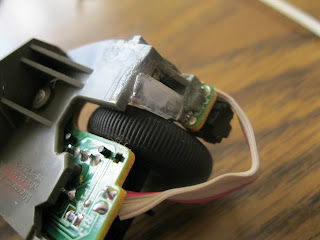 You're looking at the scroll wheel, viewed from underneath (the edge resting on the table is the part that actually extends out of the device). Picture everything above the scroll wheel (at the top of the picture) snapped off completely. The black bit to 2 o'clock of the scroll wheel is the switch for the right mouse button, and it had jammed between that ribbon cable and the mouse button. I used super glue and put it back together, moving the ribbon cable back out of the way (though it doesn't appear to be at this angle).

Directly above the scroll wheel, you'll notice a piece of clear plastic. Part of the original grey plastic was lost when it snapped apart (no idea how the piece got out of the trackball) so there wasn't anything to brace the assembly where the scroll wheel is attached. A couple hard clicks during a frustrating game and I could see the whole thing snapping off again. So I took a pair of diagonal cutters, hacked a chunk of surprisingly thick (1 mm +) durable plastic out of the little clear carry case the super glue came in and sized it appropriately. I glued it in place and the result was very solid construction with virtually no give when I pressed hard on the assembly.

I spent a good time cleaning the interior of the trackball (it really was disgusting, these pictures are after I did that) and put the whole thing back together. The result is perfect, my right mouse button is back, the scroll wheel is back to spinning steadily, and a good polish of the trackball had it gliding smoothly again.

Some day I'll have to find a way to replace the bearings when they finally wear down, which looks like it'll happen within a year or two. If this happens, the ball will begin to actually touch the inside of the socket and experience a lot of friction.

If I can't fix the bearings when they go, I'll have to find something to replace my Explorer, and I've yet to find another trackball that comes close.

Anyhow, a good little project for the afternoon that had me feeling good about breathing life back into one of my favorite devices. Nothing is more satisfying than successful repair work done with your own two hands...

EDIT - The comments below have been phenomenal, and contain a lot of great information. Fellow MTE fans, I recommend reading on. One of the links below contains some great information. My post was light on pictures; I didn't expect so many people to read this blog post when I decided to tinker with my MTE.

For detailed graphic instructions on taking apart your MTE and replacing bearings, click here. It's translated from Japanese, but has a lot of pictures and it's pretty easy to get an idea of what is being said.

Thanks again to everyone who has contributed below!

Posted by Electrofreak at 11:16 PM