skip to main | skip to sidebar

I'm back! Today I'm posting a how-to on QoS (Quality of Service) configuration on Cisco routers and switches.

QoS is a valuable tool whenever you have different types of traffic arriving at a router where they'll need to be aggregated and sent out over a single link like a WAN connection. Some types of data and applications require traffic to be handled with as little latency and jitter as possible; VOIP is a prime example of this, as well as Citrix, RDP, and anything else that involves streaming audio and video.

The reason this is important is because as a traffic arrives in a router, it gets sent into a processing queue in the router based upon the order in which the packet was received. After routing decisions are made, this traffic is sent into an input queue for the WAN interface in preparation of being sent out over the WAN link.

If this happens, critical data can be dropped, or voice traffic can be delayed while it sits in the output queue with less important traffic in front of it. Even if the voice traffic is successfully delivered, the delays can cause stuttering and poor quality on the call.

QoS prevents problems like these by guaranteeing bandwidth to critical data and preventing that traffic from being dropped if the circuit becomes congested. It can also be configured to prioritize certain types of traffic over others in terms of the order they are transmitted, to ensure time-sensitive traffic is transmitted as quickly as possible.

Hit the jump and we'll look at this in detail!

Read more »
Posted by Electrofreak at 11:48 AM 1 comments

Okay, so I'm well overdue for a check-in. A lot has happened since my last post so I'll try to fill in the gaps.

First, I got a new job. In my dream field, networking. I'm now an enterprise WAN data technician working in a NOC!

Tomorrow will be my last day of nearly 2 months of training (I was hired in the 3rd week of November). I was initially trained in Facilities, which gave me some background in telephony and TDM circuits (T1, T3, etc). I'm now able to test T1s for errors, troubleshoot phone issues on PRIs and CAS lines, and refer tickets on the local loop out to carriers for resolution.

During my training in Facilities, the company transitioned to ownership by another carrier, and I believe I was likely the last employee hired under the original company. I even played a game of Foosball with the Fortune 1000 CEO on the evening of the last day he owned the company, losing by a few points, undoubtedly due to the few pints of lager I'd had by that point. :p

After about 5 weeks came the good stuff: data training. I was trained on QoS, MPLS (multilinks), VLANs and Trunking, Metro Ethernet, Multilink Frame Relay, BGP, ACLs, subnetting and more. I already have a decent understanding of the LAN side of networking so some of the stuff like Metro E was pretty easy to understand, and I already knew subnetting, ACLs and VLANs pretty well.

On top of everything I've learned, I'm also looking at a reasonable bump in pay as well, which has me preparing a proposal to Lynn as well as a reasonable likelihood of owning a house in my future, especially as my family has one that they're willing to sell me (in one of the best neighborhoods and school districts in the country!)

I've also been offered a job writing articles on smartphones for a tech blog startup, and while I've written a few articles (and will not disclose the website here just yet), I've been so busy with my new job and the holidays that I've not written enough to earn any pay.

Lastly, I also won the Christmas Grand Prize over at AndroidAndMe.com's 25-Days-Of-Tegra giveaway! I won a Transformer Prime tablet with keyboard dock, a Sonos sound system, and a Kindle Fire! The stuff hasn't come yet (and has been a daily reminder of how impatient I am) but I'm very excited to see it come. It's possible the Transformer Prime has been delayed by ASUS' announcement that they're releasing a second-edition model that will resolve some of the issues people have had with GPS and WiFi performance due to the metal back of the tablet.

In closing, I'll try to keep up on my blog, maybe post a few Cisco-oriented articles, but I expect my life is going to continue in high gear for the next several months while I continue to focus on learning everything I can about WAN networking, get a ring for my girlfriend, and work on buying the house.

After years of struggle, I'm finally seeing my goals achieved... and I couldn't be happier!


Posted by Electrofreak at 7:49 PM 4 comments

Labels: about me, Cisco, IT

First, I've an admission to make. My phone doesn't use one of those coded lockscreens. There's a couple reasons for this... I don't have time to deal with it, and it's far too easy to get around those screens by looking at a screen at a shallow angle and seeing where the fingerprints are.

That said, my phone hardly is lacking in the security department. I've written a few pretty involved scripts in Tasker that will, when I text the phone a secret phrase, turn my phone into an information-gathering powerhouse.

Specifically in this post I'm going to describe how I can covertly and remotely grab photos from the front and rear cameras on my phone as well as see the ugly mug of the last person who unlocked my screen, and have those photos quietly emailed to me. This can be an awesome tool if your phone is stolen or if you just want to know who the last person to unlock your screen was.

I'm still here! Work has been taking up a lot of my time as of late, and I've resumed my Cisco studies. My goal is to be able to take the CCNA exam at the end of August. I'm already well versed in ICND1 (which I'm halfway through re-reviewing now) and I'll commit 3 weeks to studying ICND2 before taking the CCNA exam.

Helping motivate me is my friend Bob, who recently went to work for Google. He's studying for the CCNA too, and we're meeting weekly via Google+'s new Hangout system to discuss our progress.

For those of you still interested in Android phone news, check out this article by AnandTech:

As usual for AnandTech, the review is excellent.

Posted by Electrofreak at 10:01 AM 0 comments

The Android Invasion: My impressions of our new Neato XV-11 robotic vacuum

So, my girlfriend has always been saying that the one thing she wishes she had more of is time. She joked around with me several months back about getting a Roomba to make life a little easier for us, and my curiosity was piqued.

Tomorrow is her birthday, so I went all-out and bought a Neato XV-11 robotic vacuum. I've only played with it for about an hour, so consider this more of a "hands-on" review than anything thorough.

First, important "good boyfriend" tip. Never get your girlfriend something that you're even more excited about getting than she is, even if she said she wanted it. She certainly likes it, but I've definitely been given the "oh I see why you got it" treatment. I really did get it for her because I wanted to see her smile as a machine cleaned the house for her, but since it benefits the both of us, perhaps it wasn't exactly the best birthday present choice. Duly noted!

Read on past the break for my review.

AnandTech has gotten their hands on a Qualcomm prototype, brought it home and benchmarked it. The dual-core, 1.5 Ghz development phone runs at max clock speeds and isn't a perfect example of what we'll see in production handsets, but it does give a taste of what Qualcomm has in store for the mobile industry later this year, and the results are impressive. This unit also packs a next-gen Adreno 220 GPU and is optimized for graphics performance.

Posted by Electrofreak at 9:21 PM 0 comments

The title of this blog post also happens to be the name of the book I'm reading. Perhaps I've just been inspired to do a little necromancy of my own, but with less cadavers and more circuit board.

I'll explain; let's start with the fact that something's been bugging me. My desktop PC does not have a discreet GPU (video card).

You might be thinking, "WTF, and you call yourself an electronics freak?!" Well, you've got me there, but I do have reasons. One primary reason is that I'm not a gamer anymore. I do almost everything on this laptop nowadays, and I only took my desktop out of storage a few weeks ago so that I could get a decent VM box running in the basement next to my HTPC and my Cisco lab hardware.

However, my integrated GPU (despite it being a reasonably beefy AMD HD 3200) just ain't cuttin' it for some of the video processing and RemoteFX stuff I'd like to mess around with.

Fortunately, I have an NVIDIA 8800 GTS in a static bag that should do what I need it to do. Unfortunately, it's going to take a little more than me popping this sucker into my PC to get it running.

Problem #1: The graphics card does not have an enclosure for the heat sink; the fan cannot circulate air to keep it cool. 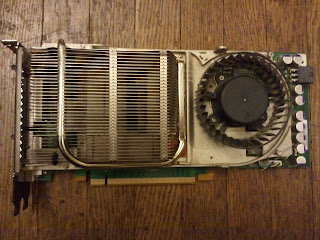 Problem #2: It's damaged goods. (Okay, I lied, the card isn't entirely dead. But someone who brings sick people back to life is a doctor, and that's a lot less fun than being a Necromancer!) It displays bands of pixels vertically across the screen that are visible during the boot process, which means it's a hardware issue, not a driver problem. Additionally, it usually won't boot into Windows, causing the system to hang when the operating system is starting up. On the rare chance it does make the boot into Windows, graphics are horribly distorted. 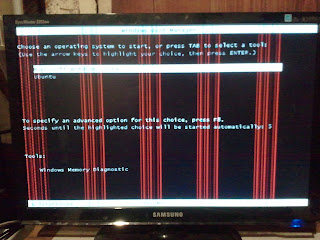 So, I'm screwed, right? Hell no! I wouldn't pass up an opportunity like this! Read on to see how I got this old workhorse running again.